Toad microbiomes as a defence against pathogenic attack

Chytridiomycosis, a fatal skin disease caused by the fungal pathogen Batrachochytrium dendrobatidis (Bd), is responsible for widespread declines and extinctions of amphibian species.

Bacterial communities associated with multicellular hosts (microbiomes) are well documented for their vital role in maintaining host health. Commensal bacteria resident on amphibian skin can inhibit the growth of Bd, and in doing so confer survival benefits to the host, suggesting that there may be a way to use probiotic therapy as a conservation strategy to mitigate the loss of amphibian species.

During my Master’s degree, I worked with Xavier Harrison and Kieran Bates at the Zoological Society of London, to identify potential candidates for probiotic inoculation. I isolated and identified bacteria from the amphibian microbiome using 16S rRNA sequencing. Using a culture-based method, I then assessed the inhibitory capabilities of isolates against Bd. 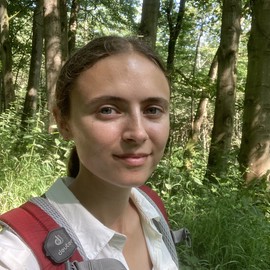